Ten years ago, the largest privately-owned winery in the world employed over 100 people in the packaging end of their bottle manufacturing factory. These individuals performed all duties from packaging and palletizing, to inspection and quality control. Despite being a mind-numbing, repetitive job with incredibly high burn-out and turn-over, the process itself was inefficient, costly and subject to a high degree of human error.

Fast-forward ten years and today this same winery has no process workers in this area — not one. Inspection systems, Robotic case-packers, Robotic palletizers, automatic guided vehicles for transport, stretch wrappers, all operating in concert with one another, and with no human intervention. Maximum profitability and sustainability have been attained.

How did they get there? A true vision for the end goal, and a passion to work through the individual steps along the way. Their efforts have indeed paid off.

This kind of break-through automation has arrived in the dairy industry in the rotary parlor. 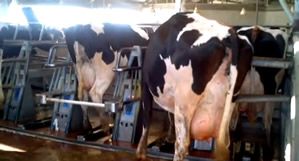 Many dairymen prefer to have cows that have not finished milking out go around the rotary a second time. The GSA Cow Retainer eliminates the need for a worker to monitor the cows and attach a chain to the rotary stall so the cow cannot leave.

The GSA Cow Retainer automatically drops a retaining bar in the stall for cows that have not been milked out so they can ride around a second time.

The introduction of the rotary parlor over a decade ago promised next-generation thinking, and indeed was the first step towards it. Unfortunately, it has been unable to deliver it fully, considering repetitive human interaction is still needed with each animal processed. Cleaning, stimulating, applying pre-dip, attaching the milking cups, reattaching as needed, and applying post-dip, all are still completed by individuals, only now they have been put in one spot and made to do the same task over and over and over. This is the same type of high-turnover task that the wineries used to experience before they were automated.

The good news? These single-point processes are perfect for robotic automation. Articulating Arm Robots — the same ones that build that favorite truck of yours — are the solution to repetitive tasks. Many companies spend millions of dollars to get their production lines into the position of being able to automate. The good news for the dairy industry is that existing rotary parlors have already done this for the dairyman, and their barns are already in the perfect position to be automated.

Radically transforming an industry toward automation does not happen overnight. Jim Frias has seen this process in the bottled water industry as well as in the aforementioned commercial wine business. The challenge faced in any industry seeking automation can be summed up in one word: "standards."

When a system is automated, the robots will perform their functions with extreme precision within a given set of parameters. When parts of the process fall outside of those parameters, the robots require further adjustment in order to accomplish the task optimally, this gives up speed and performance.

Facilities have used wooden pallets for ages. Broken boards, loose nails, and holes have always been an issue. The solution to this issue is a solid, polymer-based pallet. However, the problem with implementing this solution has been that the payback to replace these pallets, when they function in their own right, has never quite penciled out. Segments of production hours would be saved but no labor was actually replaced. Therefore, companies dealt with the inefficiencies and costs that went along with this sub-standard product.

But today, with the advent of robotics, these same pallets are now considered part of a system. They are an integral part of the payback scenario of the line efficiency as a whole and are therefore an easy line-item to accept. The small inefficiencies of the old standard are now swallowed up in the new process. In effect, the overall savings of using robotics make the numbers pencil out so you can improve the entire process, including using better quality pallets.

The Same Thing Is Happening Now In The Rotary Parlor.

Green Source Automation's first product, the RotaryMATE EXPD, performs the task of applying post-milking dip to the teats of the cows. Using patented VisiMAX imaging technology, the robot identifies where the teats are and coats them with dip — the whole process is done in less than 6 seconds so that rotary never stops.

That's where the technology is today, but it didn't start there. There were many issues to overcome as the various points in the process that were not "standard" became apparent:

Challenge: The rotaries did not maintain consistent speeds, which meant the robot would either have too much time or not enough time to perform its task. The variance in speed also made it difficult for the cows to enter the stall consistently — they would bump the safety gate more frequently, stopping and starting the rotary, which reduced milking time and caused additional wear-and-tear on the rotary itself.

Solution: GSA worked with the dairymen and the rotary manufacturers to regulate the rotation speeds. This not only improved the environment for the robot but also made it more consistent for the other labor positions and for the cows. 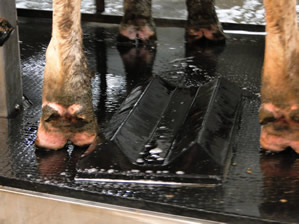 Challenge: Some cows' hind legs would be too close together so that the robot could not fit between.

Solution: Green Source Automation Leg Spreaders were developed. These simple leg spreaders attach to the rotary floor and make it difficult for a cow to stand on them, especially compared to the easy-to-stand-on flat surface adjacent to the Leg Spreaders. As a result, the cow's legs straddle the Leg Spreaders, granting easy access to the robot. The workers that attach the milk cups also like the leg spreaders because it gives them better access to the animal. 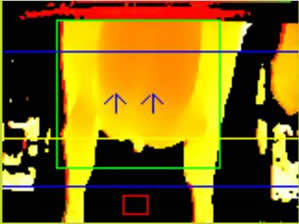 Challenge: With the window of time to treat an animal on the rotary limited to 6 seconds, every fraction of a second counts. The RotaryMATE system analyzes the height of the udder from the ground and then enters between the cow's legs, identifies the teats, sprays them with the dip, and then retracts. Long cow tails were causing the robot to enter the stall too low which then caused problems with applying the dip within the 6-second window.

Solution: The original software in the patented Leg Finder camera looked for the lowest point seen in the field of view between the legs to determine the entry height. The new software looks for the highest open areas and then confirms minimum mass properties before then entering at the optimal height.

If you would have asked the average dairyman in 2001 if he believed the milk yield per animal in the US would increase by as much as 16% in the next ten years he would not have believed you, yet that is exactly what has happened. The National average has increased from just over 18,000lbs, to over 21,000lbs per Cow.

What does this prove? The ultimate variable, a living animal, can adjust and change.

Challenge: The variation in cow shapes and temperament. Udders of all shapes and sizes have been dealt with by humans, as have cows with "attitude." As in the pallet description above, these animals have not been eliminated from the system because, in their own right, they still produce milk.

But consider this. An 80 stall rotary turning at 6 stalls a second, with cows that produce 69 lbs a day(the national average), or 23lbs per milking at 3x, will have this rotary producing almost 4 lbs of milk per second. If one of these non-conforming animals stops the rotary for 15 seconds (i.e. non-milkout or kick-off) 58lbs of production time is lost. If she is a repeat offender, the benefits of her yield are easily canceled out. Now, couple this with her keeping the Dairy from saving hundreds of thousands of dollars in robotic automation, and the answer is easy, she needs to go.

Solution: GSA has identified very definable "standards" for the cows themselves and performs a very extensive herd evaluation prior to any installation. Non-conforming animals are relocated to lower producing manually operated locations, and the high yield, top-performing, next-generation Rotary Parlor is complete.

The Bottom Line — Automation Takes Commitment — But the Reward is Real

As we've seen in most other industries, becoming a fully automated operation takes commitment and vision from all the players. In the dairy industry, it starts with the dairy owner.

One dairyman that has truly demonstrated this kind of commitment is Jack De Jong, owner of River Ranch Dairy in Hanford, California.

Over the past two years, Jack has exemplified the level of commitment needed to raise the bar not only with the rotary parlor but in the entire dairy operation, which makes the dairy run better overall. Through his effort and help, Green Source has been able to work with other industry manufacturers to improve the rotaries, hose supports, detachers, crowd gates, dips, and more. This dedication to implementing automation is allowing River Ranch Dairy to reap tremendous benefits in efficiency and overall profitability.

As other Green Source customers continue to show this kind of commitment as well, the dairy industry's manufacturers are in turn responding by modifying their products and systems to align with the automation goals.

A Global View of the Dairy

The trajectory of the industry toward full automation is exciting. Green Source continues to help dairies improve their operations by taking a global view of the whole dairy beyond the rotary and by identifying all the components that can be improved and automated in the operation. We are eager to continue to innovate and develop solutions that make total dairy automation a reality.

To learn more about how Green Source Automation can help your dairy, visit greensourceautomation.com, email us at This email address is being protected from spambots. You need JavaScript enabled to view it., or call (209) 531-9163.

Build your new rotary milking parlor with dairy automation in mind. Green Source engineers will work with you at no charge to ensure that your new rotary is built for the future of the dairy industry.

Contact Green Source Automation for a free consultation at This email address is being protected from spambots. You need JavaScript enabled to view it. or call 209-531-9163.

Green Source Automation’s rotary dairy customers experience healthier animals with reduced somatic cell counts and reduced likelihood of bimodality. Our automatic predip and automatic postdip dairy robots result in more consistent and often increased milk production, faster milk let down, and significant labor savings that pay for the technology in a short period of time and add to the bottom line for years to come. The Green Source RotaryMATE system can achieve the same results for you.

Submit the form below and we'll contact you within one business day to answer your questions, schedule a site visit at a working dairy, provide pricing, or simply discuss the technology in more detail.